In three years, the Spanish conquistador Hernán Cortés, leading a few hundred Spanish soldiers, overcame a centuries-old empire that could put tens of thousands of warriors on the field. Even after his god-like reputation had been shattered, and his horses and cannons were no longer regarded as supernatural, his ruthless daring took him on to victory. Yet in the end, his prize was not the gold that he had sought, but the destruction of the entire Aztec civilization. 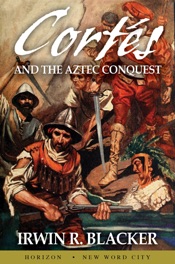