A glorious, bloody, perfect Viking saga of honour, courage, blood feud and revenge from the Sunday Times bestselling author of Lancelot, Giles Kristian. Perfect for fans of Bernard Cornwell and Games of Thrones.

"Unrelenting pace, brilliant action and characters. A masterwork." - Conn Iggulden
"Action-packed storytelling which stirs the blood and thrills the soul" - Wilbur Smith
"Easily one of the best books I've had the pleasure to read" - ***** Reader review.

His kin slain, his village seized, his taken as slaves, Sigurd wonders if the gods have forsaken him. Hunted by powerful men, he is unsure who to trust and yet he has a small band of loyal followers at his side. With them - and with the help of the All-Father, Odin - he determines to make a king pay for his treachery.

Using cunning and war-craft, Sigurd gathers together a fellowship of warriors - including his father's right-hand man Olaf, Bram (who men call Bear), Black Floki who wields death with a blade, and the shield maiden Valgerd, who fears no man - and convinces them to follow him.

For, whether Ódin is with him or not, Sigurd WILL have vengeance. And neither men nor gods had better stand in his way . . . 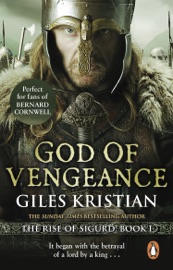